I liked the Windy Girls Quilt by Jedi Craft Girl so much that I decided to make it again! You can see my first version here! It works great when you have a fun focus fabric and want to show it off!

Once again, I wanted to make a quilt for a prior graduate assistant! Actually two as both both mom and dad had worked with me! Their little boy was born in May 2018 so this quilt was a bit overdue!

Since he is such a big boy, I didn't want to make him a baby quilt but rather one that could grow with him through his childhood. He LOVES Spiderman - when he received it he literally said "I love Spiderman!" 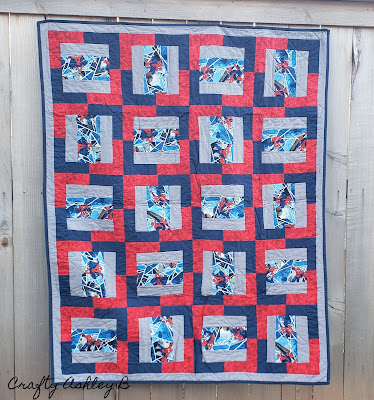 The quilt measures right at 4 feet by 5 feet and will work great as a throw as he gets older!

Click here to read more
Posted by Crafty Ashley B at 1:07 PM 3 comments:

My Take on the Windy Girls Baby Quilt

One of my previous graduate assistants had a previous baby boy in July 2020. I actually finished this quilt prior to his arrival but just didn't get a chance to photograph and mail it before he arrived! It did make it to him before he turned two weeks though!

I had this darling woodland fabric that would work perfectly in his nursery! Plus I had the other fabrics on hands! #fabricstash for the win! 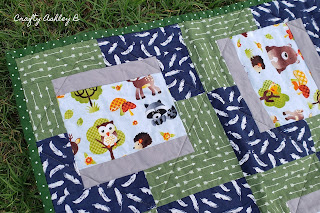 I struggled for a bit to find the perfect pattern to show it off but happily across this pattern Jedi Craft Girl called the Windy Girls Quilt.

I did size it down a bit from a finished size of 12" squared to 10" squared. I did this by sizing down what the original pattern referred to as the white dot strip from 2.5" to 1.5". I also cut the block down to 6.5".
Click here to read more
Posted by Crafty Ashley B at 5:25 PM 4 comments:

Back in 2017 I made a pixelated heart quilt for a church friend. During the summer, I made it again for a new church friend who had a little girl in March 2020. I was finally able to gift it to her during July 2020.

I also made two matching doll quilts - one for her older toddler and one for the new baby as well! Unfortunately it appears my photo storage didn't back up those photos properly! So I do not have any photos of them.
Here is the baby quilt though! I love the bird fabric and had did the fabric pull a couple of years ago but never made it. I'm glad I waited! 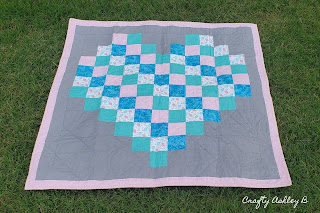 I pieced the top by cutting strips, sewing them together and then cutting them down. I then unpicked the blocks as needed to make the chevron pattern. Not sure if that description makes any sense!
Click here to read more
Posted by Crafty Ashley B at 3:29 PM No comments:

It seems only fitting that the last thing I blogged about what the delivery of my son and his quilt and the first new thing should be his quilt! Plus his second birthday is only a few days away!
I encountered quite a large creative block when it came time to make my son his baby quilt. For some reason, no pattern or fabric was quite good enough for him. Due to his enlarged kidneys, we knew for the second half of my pregnancy that I would be induced at 38 weeks. Which actually changed when I was at the 34 week mark to 37 weeks. So I definitely had a firm deadline!
When I was around 29 weeks I finally decided to do an Irish chain using a simple 9-block utilizing jelly roll strips. But I still couldn't do it - I didn't make the first cut until right after I found out that our induction was moved! In about a week's time I pieced the top but just could not manage to quilt it before I was going to have him!
As I shared previously (here) my son arrived via an unplanned C-section after a failed induction. My recovery went well and I would say by the time he was 4 weeks I was feeling "normal".
Every week we took a photo of him on the quilt and around the 6 month mark I finally felt up to trying to quilt it. I quilted it on the diagonal so each pass actually took a good amount of time! I would usually do two or three passes at a time. 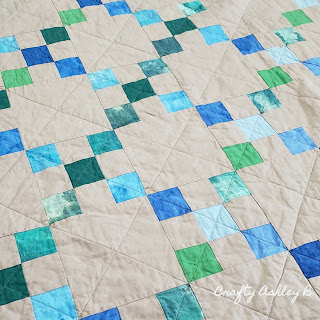 Click here to read more
Posted by Crafty Ashley B at 3:32 PM 2 comments:

A Finish and a Start

Exactly two months ago on Friday, January 4, I finished but also started a huge project that I have been working on since May 2018. On this day, my precious son was born. A little boy that my husband and I have fervently prayed and longed for and the Lord blessed us with.

Click here to read more
Posted by Crafty Ashley B at 3:09 PM No comments: